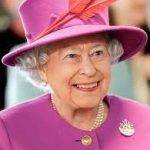 Article in the Royal Borough Observer 25.3.22

VOLUNTEER gardeners slipped on their gardening gloves as they continue to make progress ahead of this year’s Platinum Jubilee celebrations.

The Windsor and Eton Society were replanting key areas in Heritage Garden, on Church Street, on March 19, as part of the group’s Platinum Jubilee Facelift 2022 project.

And RBWM Lead Member for Windsor, Cllr Samantha Rayner, popped along to see the work they were doing.

The project, the ninth since the original “Facelift” was inaugurated by Her Majesty in 1961, aims to make sure both Windsor and Eton are looking in top form for Her Majesty’s Platinum Jubilee celebrations at the beginning of June.

The Society wants to encourage businesses and residents in the two towns to put on a colourful and patriotic display to mark the occasion.

The group is encouraging property owners to tidy commercial and residential buildings, as well as helping restore public realm spaces which will feature purple and white flowers, with the towns decorating central streets with flags and bunting.

Margaret Lenton, chairman of the Windsor and Eton Society and Facelift 2022, said: “We’re absolutely delighted to see such visible progress already being made.

“Thank you to everyone for their enthusiastic interest in supporting these efforts to show our profound appreciation for Her Majesty’s service through this exceptional celebration.” 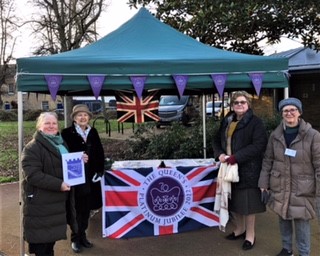 Hi Everyone,
Margaret, Susy, Theresa, Susie and I had a really good morning at the Farmers’ Market today despite the cold and a very unpredictable blustery wind which from time to time carried our leaflets far and wide.  Many thanks to Claire and Dave for lending us the gazebo and to Colin, Ian and David for helping put it up.

The Jubilee Committee via Helen Sandom produced some brilliant flers for us to hand out, detailing the events which are planned in Windsor for the Jubilee weekend and these proved to be an excellent entree to many discussions with residents who stopped first to find out about the events, and then stayed to hear about the Facelift.  We signed up about a dozen who were interested in hearing more, and I am sure that at least some of these will volunteer to plant or paint later in the spring.  We will do this again in a couple of months.
Best Wishes
Alison

Brilliant to see that new benches have appeared in the River Street Garden.

A huge thank you to all the wonderful Windsor & Eton Society Members and supporters who turned up this morning to tidy up the Heritage Garden and plant bulbs for a spring display.  What a transformation in just a few hours!  Thanks too to the chaps at Tivoli who did the initial heavy clearance so that we had the space to work, and the lovely staff at the Clarence Brasserie and Intoku, who provided the hard-working gardeners with tea and sushi!

Just see what we achieved. The garden is back to being a welcoming space for our visitors to take a break. There are plans to replant with new shrubs and perennials next spring, but in the meantime, we look forward to seeing all our new bulbs come up in the New Year. 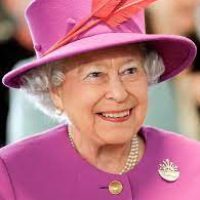 In the summer 0f 2022, Windsor and Eton will be celebrating two important anniversaries – Her Majesty’s seventy years on the throne (her Platinum Jubilee) and the 100th anniversary of the granting of Windsor’s Royal Charter.

So that the town centres are looking their best for the Jubilee, The Windsor and Eton Society, in partnership with The Royal Borough, has launched the Windsor & Eton Facelift 2022 project.  The Facelift will focus on refreshing public spaces around the town centres, encouraging building owners to spruce up their premises, and facilitating decoration of both towns with flower displays in the Jubilee colours of purple and white.

The main Jubilee celebrations will take place in London, but Windsor and Eton will also be a focus with plans for a series of events starting with a horse pageant in conjunction with the Windsor Horse Show in May and including a grand picnic on the Long Walk and lighting the ceremonial Beacon, which are scheduled to take place during the Jubilee weekend at the beginning of June. For more details see the Windsor Jubilee website: https://www.windsorplatinumjubilee.co.uk

Individuals, businesses and the Borough itself have been badly affected by the pandemic and are critically short of funds.  The Facelift will, therefore, rely on the wider community to help with both sponsorship and voluntary labour.

A first working party is being held at the Heritage Garden in Church Street at 10:00 am on Saturday 6th November, to clear overgrown vegetation and plant bulbs.  If you can help –  with this working party or later efforts to “clean, paint and plant” or perhaps by sponsoring a floral display or garden planter, a bench or an information board,  then please send your details to wandefacelift2022@gmail.com and a member of our team will be in touch.  A £30 donation for example would buy a good-sized shrub, and £80 would sponsor a flower basket including watering for the whole of the summer.

Please get involved in this sparkling Jubilee effort and make our unique historic towns places to be proud of as we celebrate these significant milestones. By giving visitors and residents alike a splendid visual experience, you will also be helping our valuable businesses recover from the recent deeply difficult times. We very much hope you will join us!

“Windsor & Eton Facelift 2022: Making Windsor and Eton as Beautiful as they can be for the Jubilee!!”

Next year, 2022, will mark the Platinum Jubilee of Her Majesty Queen Elizabeth II. To support this unique and momentous historic event, The Windsor and Eton Society will be promoting a special opportunity for Businesses, residents and community organisations. Launching on 13th September at the Castle Hotel, Windsor High Street, the “Windsor & Eton Facelift 2022”, an initiative of The Windsor and Eton Society, is being undertaken with the Windsor & Eton Town Partnership and the Royal Borough of Windsor and Maidenhead, working in conjunction with the main Committee coordinating the Windsor and Eton Jubilee Celebrations. Our aim is to have our two towns looking their sparkling best in time for Her Majesty’s Platinum Jubilee celebrations in June 2022, and everyone’s help will be needed!

“Facelift 2022” takes its inspiration from an idea conceived in the 1950s by the then Civic Trust (now Civic Voice) to re-examine and re-think British town and city centres following the ravages of the Second World War a decade earlier, believing that well-considered external improvements to buildings and public spaces – often on a very modest scale – result in a sense of visual unity and harmony which would, in turn, raise civic pride and improve local trade.

Windsor’s first “Facelift” (“Windsor Street Improvement Scheme”) took place in 1961 and included permission from Her Majesty The Queen to remove Windsor Castle’s moat wall and reveal the striking greensward in the town centre. In addition, the “WSIS” featured a wide range of often small but noticeable improvements and was inaugurated by Her Majesty in the presence of hundreds of local residents, Mayors and civic representatives from around the country, such was the importance of the project.

There have been eight Facelifts to date, the most recent one in 2012 focusing on celebrations of The Queen’s Diamond Jubilee. Installation of floral displays has always formed a key part of such activities as well as cleaning and repainting building façades when possible, together with other improvements such as clearing away unsightly wires, cables and unnecessary signage and making minor repairs to stonework and joinery.

Restrictions as a result of the pandemic have hit the towns’ residents and Businesses hard, and funds are in short supply. We have set our aims accordingly, and from the spring of next year we will be seeking support from Businesses and residents for a general “Clear, Clean and Tidy-up” for a co-ordinated effort to beautify our towns – such as newly planted public spaces and garden areas and buildings tidied and adorned with flower baskets and planters. It is our way of saying “Thank you!” to The Queen for her life of service to her people, and we are immensely proud and privileged that she considers this her home.

We hope Businesses and residents will be persuaded to consider mounting a hanging basket or creating a display of flowers in purple and white – the Jubilee’s official colours.  Help will be provided by the “Facelift 2022” team and volunteers, and advice on alterations or repainting of town centre buildings will be available from the RBWM Conservation Team.  Whilst the official “Facelift 2022” will apply particularly to the two town centres, other areas throughout both towns are encouraged to be part of this community effort.  We hope as many people as possible will join us in making our towns cleaner and brighter for the Platinum Jubilee – places to be truly proud of in 2022!